In essence, the Administrative Order directs parents to follow any parenting plan that has been established and cooperate in making alternate arrangements if exchanges were to take place at now-closed schools or daycare.  If a parenting plan has not yet been established, the Order directs parents to permit and facilitate access of children to the other parent. The Administrative Order reads, in part, as follows:

WHEREAS, the World Health Organization has declared the Coronavirus Disease 2019 (COVID-19) a pandemic, the Governor of Florida has declared a state of emergency exists, and the Surgeon General and State Health Officer have declared a public health emergency exists, and the Florida State Courts must take steps to mitigate the effects of COVID-19 on legal proceedings and participants in those legal proceedings; and

WHEREAS, since March 17,2020, the Florida Supreme Court has issued various Emergency Administrative Orders found at https://www.floridasupremecourt.org/Emergency , which include ordering the cancellation or postponement of all non-essential in-person hearings, and this court entered Administrative Order 2020-4.2, setting forth COVID-19 Emergency Procedures and Mission Essential Functions; and

WHEREAS, on April 1, 2020, Florida Governor Ron DeSantis entered Executive Order 20-91, referred to as a “Safer at Home” order, which orders all persons in Florida to limit their movements and personal interactions outside of their home to only those necessary to obtain or provide essential services or conduct essential activities; and

WHEREAS, it is necessary to reduce the number of “emergency” filings and hearings in family division cases until non-essential in-person hearings resume; and

NOW THEREFORE, pursuant to the authority vested in me as Chief Judge of the Twelfth Judicial Circuit of Florida, under Rule 2.215 of the Florida Rules of Judicial Administration, it is hereby ORDERED:

END_OF_DOCUMENT_TOKEN_TO_BE_REPLACED 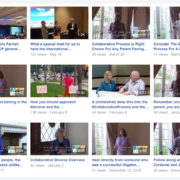 Kids are often caught in the middle of divorce. Their parents are fighting, and many times the kids’ needs get ignored.

Fortunately, not all divorce processes are the same.  Collaborative divorce gives parents the opportunity to work in a non-adversarial setting and develop a parenting plan tailored to meet children’s needs.

In the video below, therapist Jacquie Lamb, LMHC, discusses collaborative divorce and children.  This video was produced by the Florida Academy of Collaborative Professionals.

END_OF_DOCUMENT_TOKEN_TO_BE_REPLACED

Author, psychologist, and collaborative trainer Jeremy S. Gaies, in A Clear and Easy Guide to Collaborative Divorce, discusses the role of the Collaborative Facilitator (which he describes as “coach,” using the nomenclature of the International Academy of Collaborative Professionals) in the following excerpt:

END_OF_DOCUMENT_TOKEN_TO_BE_REPLACED

Florida Statute § 61.13 lists the factors that the law will consider when developing a child custody, also known as time-sharing, schedule. One major factor is whether you will encourage a close and continuing relationship between the children and the other parent. The law considers your histories and personalities. Section 61.13 examines whether you will be reasonable when changes are required. The law also considers your ability to keep each other informed regarding important matters regarding the children. Florida law frowns upon parents who disparage the other in front of the children or bring the children into their disputes.

Section 61.13 also discusses parental responsibilities and whether third parties will have decision-making authority. For example, if you work eighty hours a week, it may not be realistic for you to have custody the majority of the time. Another consideration is whether you will be able to participate in the children’s school and extracurricular activities.

Another factor is whether you have demonstrated the capacity and disposition to determine, consider, and act upon the needs of the children as opposed to your own needs or desires.

It is important to maintain stability as much as possible for the children.  Accordingly, the law considers the length of time the children have lived in a stable, satisfactory environment. Often times, if a temporary schedule is going well, the law suggests that it may be best to keep that custody schedule in place, especially if the child is tied to that home, school, and community.

END_OF_DOCUMENT_TOKEN_TO_BE_REPLACED

AMC’s The Walking Dead recently premiered its season 8 debut.  For the uninitiated, The Walking Dead follows former deputy sheriff Rick Grimes and others as they navigate a post-apocalyptic world of zombies (which they call “walkers”).

The Human Element of The Walking Dead

Even more interesting than interactions with the walkers, the show focuses in on the interaction between people.  Rick and the gang have fought off a host of bad guys.  A one-eyed psychotic governor.  Bar-B-Que loving cannibals.  Most recently, a baseball bat-wielding sadist with a sophomoric sense of humor.

But the most fascinating part of the show may just be its human drama surrounding relationships between Rick and his family.  Last season, Rick made a startling admission to Michone.  Michone is a samurai sword brandishing badass and Rick’s current love interest.  The admission concerned Rick’s daughter, Judith.

When the apocalypse started, Rick had been separated from his wife, Lori.  Lori escaped the initial chaos with Rick’s best friend, Shane.  Shane and Lori thought Rick had died with the initial wave of walkers, and Shane and Lori became romantically involved.

Lori and Shane’s relationship ended when they learned Rick was still alive.  Inevitably, tensions rose between Shane and Rick, which lead to Rick killing Shane.  Eventually, Lori gave birth to a child, Judith, though Lori did not survive the birth.

Which brings us back to Rick’s admission to Michone.  Rick tells Michone he knows that Shane is Judith’s biological father.

So who is Judith’s legal father?

END_OF_DOCUMENT_TOKEN_TO_BE_REPLACED

Senate Bill 972, the “Collaborative Law Process Act,” is making its way through the Florida Senate and will hopefully become law this summer.

Families in Tampa Bay, Greater Sarasota, and throughout the state of Florida are already utilizing the collaborative process to resolve divorce and other matters privately and respectfully, but a big improvement with this bill is that there will be a statutory framework to ensure discussions had in the collaborative process can be enforced as confidential.   END_OF_DOCUMENT_TOKEN_TO_BE_REPLACED

Any Florida parent who is going through a divorce with children or otherwise dealing with child custody issues will need to have a parenting plan.  A parenting plan is document that is either agreed upon by the parents or created by a judge that sets out each parents’ rights and responsibilities.  The Sixth Judicial Circuit (Pinellas and Pasco Counties) further describes a parenting plan as follows:

It is the public policy of this state to assure that each minor child has frequent and continuing contact with both parents after the parents separate or the marriage of the parties is dissolved and to encourage parents to share the rights and responsibilities, and joys, of childrearing. Florida Statutes, section 61.13(2)(c).

A parenting plan is a document developed and agreed to by the parents of a minor child, and approved by the court, or if the parents cannot agree, established by the court, which governs the relationship between the parents regarding the child (encompassing “custody”, “parental responsibility”, and “visitation”). A parenting plan may address issues such as the child’s education, health care, and physical, social, and emotional well-being, and must include a time-sharing schedule. The parenting plan must take into account the Uniform Child Custody Jurisdiction and Enforcement Act, the International Child Abduction Remedies Act, the Parental Kidnapping Prevention Act, and the Hague Convention on the Civil Aspects of International Child Abduction when addressing jurisdictional issues.

For purposes of establishing or modifying parental responsibility and creating, developing, approving, or modifying a parenting plan, including a time-sharing schedule, which governs each parent’s relationship with his or her minor child and the relationship between each parent with regard to his or her minor child, the best interest of the child shall be the primary consideration.

Any parenting plan approved by a court must address the following issues:

END_OF_DOCUMENT_TOKEN_TO_BE_REPLACED

May a Florida Family Law Court deny a parent custody rights solely because he or she has HIV or AIDS?

According to section 61.13(6), Florida Statutes, the answer is no, but the court may take some actions.