In Florida, a family law court is authorized to divide spouses’ marital assets and liabilities as part of a divorce.  This is known as equitable distribution.

A dog or cat adopted during the marriage would be considered a “marital asset” to be distributed.  A court will either ratify an agreement on the pet, or determine how to distribute the pet based on the factors laid out in section 61.075, Florida Statutes.

Interestingly enough, the legislature of Maryland is considering a bill that would treat animals more like children.  From the Washington Examiner:

Essentially, the law gives the court the power to issue a custody agreement for pets. While it may seem a little silly on the surface, to couples who don’t have kids, pets are the next-best thing. And — especially if it’s a bitter divorce — they’ll fight tooth and nail over them.

Here’s what the proposed law would allow the court to do:

The court cannot order either party to pay any pet expenses to the other party.

If you have questions regarding equitable distribution or other issues associated with divorce, you may schedule a consultation with The Law Firm of Adam B. Cordover, P.A., by calling us at (813) 443-0615 or filling out our contact form. 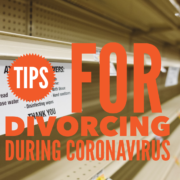 Tips for Divorcing During Coronavirus