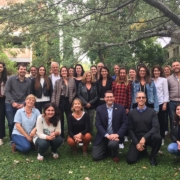 The course was hosted by the Institut des Hautes Etudes en Médiation et Négociation (“IHEMN”) as two-days within a broader 200-hour class.  Those who wish to become mediators in France must take this (or a similar) 200-hour class.  Twenty-six people attended the course, and among them were lawyers, entrepreneurs, police officers, and retired judges.

The title of the two-day course was “Collaborative Practice in the USA: An Intercultural Advanced Training.”  It included the following modules:

END_OF_DOCUMENT_TOKEN_TO_BE_REPLACED

Florida is a “No Fault” divorce state.  This means that parties do not have to accuse one another of doing harm to the marriage, such as by committing adultery or domestic violence, for a judge to grant a dissolution of marriage.  Rather, a party merely needs to allege that the marriage is “irretrievably broken.”

The usual test that a Tampa Bay judge gives to determine whether the marriage is irretrievably broken is to ask the question, “Would therapy or counseling help repair the marriage?”  If either party states that counseling would not help, a final decree of divorce will likely be granted.

As it turns out, England is not a “No Fault” divorce jurisdiction.  The New York Times reports that, since English parties must give reasons for seeking divorce, the court record is filled with highly personal, and sometimes downright wacky, divorce allegations.  Below are some of those allegations: