In Judaism, like in many religions, marriage is not only a union between two partners, but it is the intertwining of two souls.  However, according to Chabad.org, just as G-d prescribes a way to fuse two souls, G-d has also provided detailed instructions on how the souls can be reverted to the state of independence.

A divorce in Jewish law is formalized by a get, which is a dated and witnessed document within which the husband states his unqualified intention to divorce his wife.  If a husband does not provide his wife with a get, then the couple is not considered divorce, and so the wife cannot get remarried. 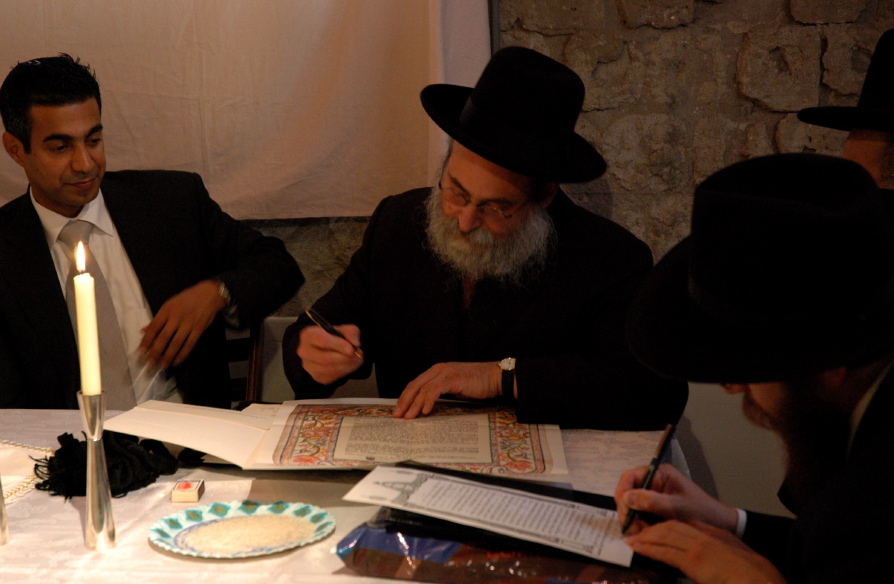 According to ITIM, an organization that helps people navigate the religious authorities’ bureaucracy in Israel, “Unfortunately, the get has become a tool for expressing anger and revenge and is a weapon in the hands of the one member of the couple who refuses to grant or receive the get and locks in (‘anchors’) the other party.  Such anchoring is especially problematic for a woman since it prevents her remarriage.”

To prevent the problems that come with a man refusing to provide his wife with a get, in May 2006, the Rabbinical Council of America reiterated a previous resolution that “no rabbi should officiate at a wedding where a proper prenuptial agreement on get has not been executed.”  Further, as a deterrent to get-refusal, the International Young Israel Movement, Council of Young Israel Rabbis in Israel, and the Beth Din of America suggest the use of a Prenuptial Agreement for Mutual Respect.

The Prenuptial Agreement for Mutual Respect starts with a simple premise: the parties want to live and be married under Jewish law.  However, if a spouse wants to live apart from the other, he or she shall provide the other spouse with written notice.

However, so long as the spouses remain married, the Husband shall provide support  to the Wife (regardless of her need for support), assuming that the Wife is not unduly obstructing the divorce.

This effectively means that, if the Husband refuses to provide the Wife with a get to end the marriage, then he will perpetually be on the line to provide her with a monthly spousal support payment.

A model Prenuptial Agreement for Mutual Respect includes a clause that, if either of the parties do not live in Israel, then the parties agree that it will be binding in arbitration via the Beth Din of America.  However, this agreement could also be submitted to a Florida family law court and would likely be found enforceable by the civil court’s contempt powers.

Like any prenuptial agreement, I would strongly suggest that this agreement be developed by the engaged couple and their attorneys via a collaborative process, where the attorneys agree that they will help both parties focus on the future and their mutual interests rather than a potential fight in court.  In fact, the attorneys in a collaborative process contractually agree that they can never be used to fight in court against the other party, so they have no incentive to create future conflicts.

However, as this type of prenuptial agreement would include a combination of Florida family law and Jewish law, I would recommend including a Rabbi as a neutral facilitator and adviser to ensure all precepts of Jewish law are followed.

If you have questions about prenuptial agreements in Tampa Bay, Greater Sarasota, or elsewhere in Florida, schedule a consultation with Family Diplomacy: A Collaborative Law Firm at (813) 443-0615 or CLICK HERE to fill out our contact form.